Learning a world language is not just an academic exercise at Richmond Waldorf School; it’s a gateway to understanding cultural traditions and experiences in the daily lives of people. It increases the flexibility of a child’s thinking and also encourages a heightened awareness of our native language, highlighting its particular capacities of expression, its own beauty and musicality. 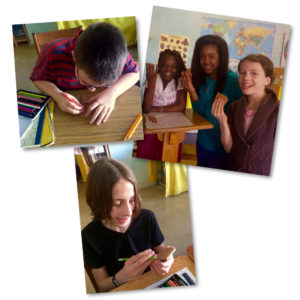 The 6th Graders have been studying Spain this year, including performing a play of the famous legend of El Cid. In the second semester, the class has been reading “La gitanilla”, a short story about a young Gypsy girl by the eminent Spanish writer Miguel de Cervantes. The story features much music and dance with castañuelas (a handheld instrument made typically of shells that dancers rhythmically clack together while dancing) and tamboriles (a type of percussion instrument).

For a fun Friday class, the students made castañuelas from cardboard, stones, and glue while listening to traditional Spanish music that would have been played around the time of “La gitanilla”. We were all fascinated by the differences in the sounds that our castañuelas made. The students also had great fun trying to play them as quickly as we heard the professionals playing them. Two of our boys created a rhythm and short dance to teach the other students, which we enjoy doing each day to lift our spirits and get in character.