Our Bike Program: How it All Began

Two years ago, when my students were just starting first grade, I asked RWS parent Glenn Amey, who I knew had a lot of experience with family biking, if he thought that all first graders should be taught to ride bikes. And did he think that they could get to the point where we could go out riding through Richmond, explore its trails, and take trips to interesting places.  Perhaps by sixth, seventh, or eighth grade, might we even go on extended bike tours and camp along the way? “Sure,” said Glenn, without hesitation.  “They can do that.  Let’s make it happen!”

Thus began Richmond Waldorf School’s bike program. We quickly raised the funds to purchase three bikes, and the following summer we received donations to buy four more. Clint at Coqui Bicycles sold us the first batch of bikes at cost and donated helmets, and this year, a generous donor made it possible for us to complete our fleets: 10 bikes for beginners and 10 trail bikes with gears for intermediate cyclists.

During the first year, Glenn worked with the students on the school grounds. By the second year, we were going to Westover Hills playground to do laps around the field and work on skills on the pavement.  Our second year culminated with a ride from the Carillon through Westover Hills back to school.

This year Glenn has been working with early childhood students, introducing them to strider bikes, and he has had weekly classes with the first graders and with the third graders.  He and his wife Letitia, our fourth grade class teacher, took her class on an overnight ride through Williamsburg to Jamestown.  He also helped John Humphries design a bike shed to house our fleet and has been assisting the third grade in its construction.

As he developed our program, Glenn recognized that there might be a way to combine his family’s love of biking, his work with our students, and his desire to expand his work to serve Richmond’s biking community.  Thus was born Shift Bicycles, 113 N. 18th St., which specializes in family biking and provides proper bicycles for everyone in the family—ages two through one hundred and two.

The biking program would not have been possible without Glenn’s vision and commitment. Until now, he has volunteered his services, but I hope that that the day is fast approaching when biking will officially become one of RWS’s program offerings, with a budget for staff and equipment.At this time of Thanksgiving, on behalf of all of us who have benefited from Glenn’s initiative and generosity, I would like to express our deep gratitude for all he has done for us. 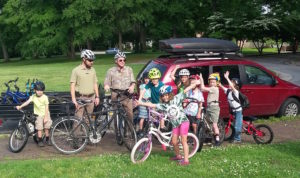 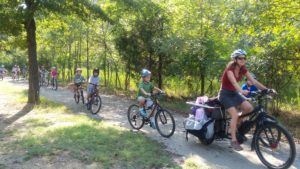 « Beyond Vocabulary: Connecting to History and Culture in Spanish Class» The Spiral Walk: Carrying Light Through Darkness
Richmond Waldorf School