Earlier in December, members of our extended RWS community were surprised and saddened to learn of the recent death of one of our school’s primary founders, Maria Butler (pronounced Mariah). Her passing occurred over the Thanksgiving weekend and was announced with an obituary in Sunday’s Richmond Times-Dispatch.
Many within our community are more familiar with one of the school’s original founders, John Moses, who passed away earlier this year in February. However, Maria’s role was just as critical to our school’s history and to whom we have become today. John and Sara Moses began the first iteration of Richmond Waldorf School in their home in 1985 when Sara began teaching the Moses children and other early students around the family’s dining room table. John filed the articles of incorporation for what was initially called Trinity Waldorf School in 1988, and the school eventually moved from the family home into rented church space on Richmond’s Northside. However, after its first few years of growth, enrollment declined, and the school closed in 1992.
Maria came to Waldorf education late in her long teaching career, bringing a wealth of elementary school experience with her. Intrigued by the Waldorf curriculum’s emphasis on child development and its attention to nurturing the whole child (head, heart and hands), Maria began serving as an assistant teacher in Sara Moses’s classroom in the early 1990s while also attending the Richmond area study group led by John Moses. After the school’s closing in 1992, Maria maintained her interest in Waldorf education traveling to visit other nearby Waldorf schools as well as attending regional and national workshops and conferences on Waldorf education before enrolling in and completing in 1995 the Waldorf Teacher Training at Sunbridge Institute in NY. Simultaneously, Maria worked to carefully cultivate a small community of families with young children by holding frequent supportive and educational gatherings in family living rooms around Richmond. A core group of these committed parents met weekly with Maria at the Unity Church near Byrd Park every Wednesday for nearly two years to plan and prepare for the re-opening of a Waldorf School in Richmond.
In the mid-1990s, the educational landscape across the greater Richmond metropolitan area was far more limited than it is today with very few options beyond public schools and religious-based private schools. With the blessing and active support of both John and Sara Moses and the critical involvement of pioneering parents, Maria reformed and re-founded RWS as the then Spring Meadow Waldorf School, opening its doors in rented church space on Laburnum Avenue in the fall of 1996 with a kindergarten class of fourteen children that grew to twenty students by the first year’s end.
According to one founding parent, the school had only $47.00 in its bank account before collecting tuition for that first 1996-97 school year – a testament to the determination of Maria and the early community she formed. Despite the 1988 filing of our articles of incorporation, 1996 is the date by which we mark RWS’s continuous and uninterrupted operation as a school. As such, thanks to Maria, those early families and faculty members, RWS will celebrate its 25th anniversary next year in 2021-22. Some of our school’s earliest teachers who worked with Maria remain on our faculty today and many founding families continue to be connected to RWS through our extended alumni community.
Maria is fondly remembered for her dedication and commitment to the school during the years of its new beginning, working tirelessly and often times for little or no salary. She not only taught the children, but provided educational sessions for parents as well, tended to administrative matters, and worked with the young Board of Trustees, all while continuing to recruit new teachers and families. Maria is also remembered for her a steadfast desire to make Waldorf education available to all children. In the early days of the reforming of the Richmond school, the community of pioneering parents were regularly engaged in conversations with more established schools in Charlottesville and Chapel Hill, but also involved in efforts to spark interest in Waldorf education in the Williamsburg and Fredericksburg areas.
In 2001, Maria stepped away from the developing Richmond school for a few years while remaining active in John Moses’s study group. In 2008, Maria returned to the renamed Richmond Waldorf School at its then Westover Hills location where she served for nearly a decade as the lead teacher for the Sprouts program.
As the Sprouts lead teacher, Maria was in her element – just as she was in her earliest days of the school – drawing upon her generous warmth, wit and wisdom to help a new generation of parents learn about and grow to love Waldorf-inspired principles for raising and teaching their young children. Her gentleness and grace with her students helped them learn through songs, stories, simple crafts and snacks about rhythms of the day, seasons of the year, their roles within their families and their place in the world. Many families were inspired by Maria to remain with RWS enrolling their children for years to come.
In 2017, shortly before RWS took ownership of our current school home, Maria taught her final Sprouts class and relocated to Raleigh, North Carolina to be closer to her daughter, son-in-law and granddaughter. In the years since, members of the extended RWS community remained in touch with Maria, grateful for and indebted to her legacy. She remains deeply loved and dearly missed.
Written by Katie Adams Parrish, RWS community member and RWS Board Chair, 2014 – 2018 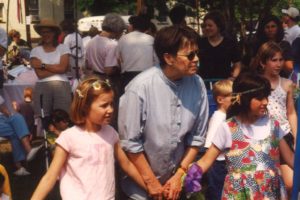 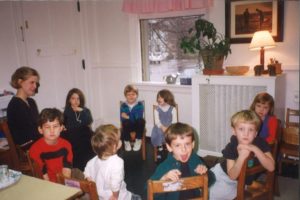 One of our first classes at Spring Meadow Waldorf School 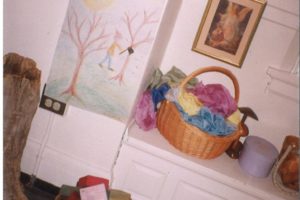 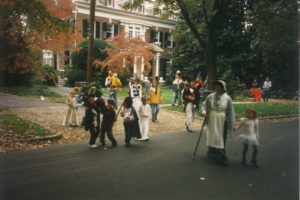 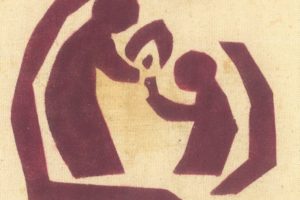 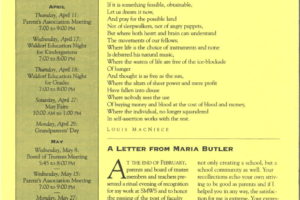 A beautiful old newsletter from Spring 2002!